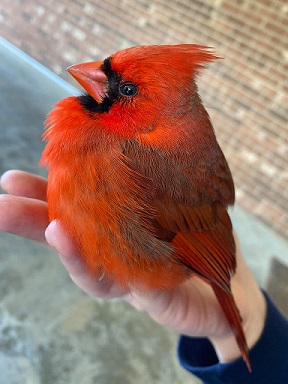 Angela Buck in Pennsylvania stumbled upon a Cardinal back on April 9th.  She’s letting me share her story about Clifford the Cardinal.

It’s amazing.  Sure we have probably all seen a Cardinal.  But not this close.  Right?

How cute is this little guy? 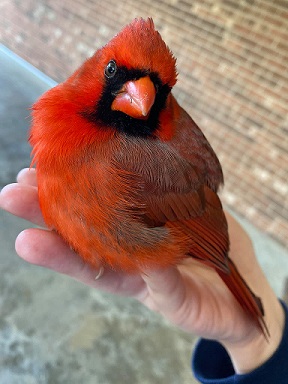 On the morning of April 9th, Angela was about to let her dogs out and she saw a cardinal sitting in the driveway.  She didn’t want her dogs to find it so she went to pick him up and he hopped into her hand.  He didn’t seem hurt, he was moving his head and repositioning himself on her hand.  He wouldn’t fly away.  She said he stayed with her for about an hour.  She called a bird rescue and they suggested she put him in a dark box in a quiet place for a couple of hours to let him rest then take him back outside and try to help him fly away.
Well, she did just that. Angela let him rest in a box for about 2 hours and then took him outside to see if he was feeling any better.  Which he was and he flew away.

You can see more pictures and a video of Clifford flying away on Angela’s Facebook page.

With everything going on in the world right now, I thought this was a very sweet story that I wanted to share with you.

Thank you Angela for letting us share your beautiful story.

cardinal fun red rescue saved wfls wild bird
May 22nd, 2022
View full playlist
Connect With Us Listen To Us On