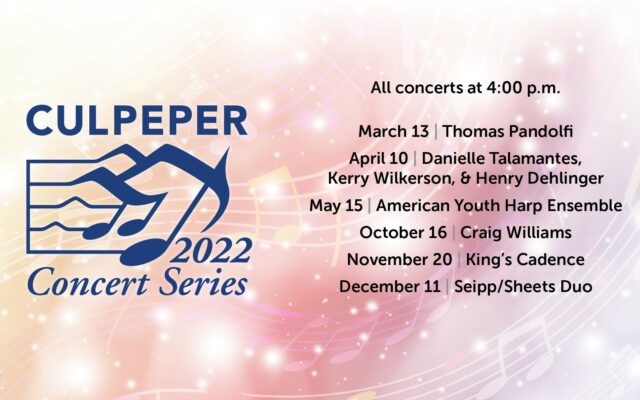 Culpeper Baptist is back with six amazing concerts for our community! After an extended break because of the pandemic, we have arranged an exciting line up of stellar musicians–with the first concert scheduled for March 13, 2022, featuring concert pianist, Thomas Pandolfi of Washington, DC.

Mr. Pandolfi, a prodigy, began his music career at the Juilliard School (BM & MM), where he caught the influential ears of Vladimir Horowitz, who would later become his mentor, and legendary composer, Morton Gould. Since then he has been an audience favorite, selling out prestigious stages around the world, including the Lincoln Center Alice Tully Hall, Strathmore, The Kennedy Center, Kiev Opera House, Bucharest’s Romanian Athenaeum, London’s Cadogan Hall and many others. His one-of-a-kind, jaw-dropping performances keep audiences of all ages returning to his concerts again-and-again! Come join us for a Sunday afternoon of beautiful music!