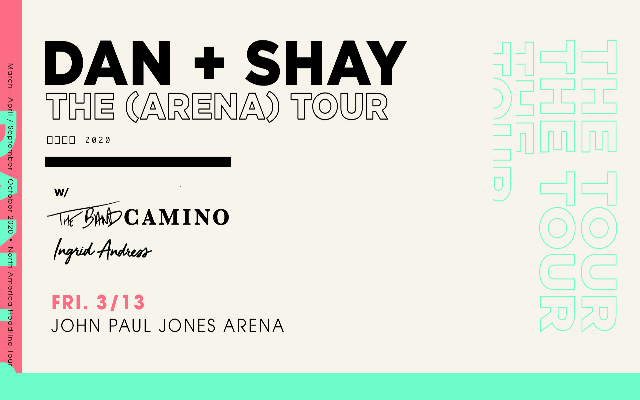 Dan + Shay have recently announced their plans for their first ever headlining tour. The tour will consist of over 35 dates starting in Nashville, TN at Bridgestone Arena and end October 31 in Tacoma, WA. The Band CAMINO and Ingrid Andress will serve as support on the tour. The tour will stop locally has been postponed to September 11th in Charlottesville,VA at John Paul Jones Arena.  Tickets will still be honored.

Fans can expect to hear a plethora of songs from the duo’s previous albums including “Tequila,” the song that earned them their first ever Grammy award. In addition, their newest song, “10,000 Hours,” is sure to be a crowd favorite on tour.

The Arena Tour follows their sold-out Dan + Shay The Tour from early 2019. Most recently, the pair shared the stage with Florida Georgia Line on their Can’t Say I Ain’t Country tour. Additionally, they toured in Australia with Shawn Mendes.